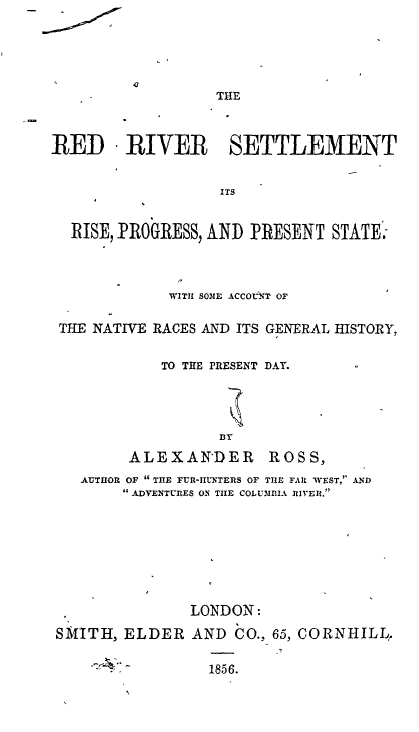 After serving in the Canadian–British military detachment sent to the colony during the 1869–70 troubles [see The Red River Rebellion and the Creation of Manitoba, 1869–70], the officer William Francis BUTLER was called on by the lieutenant governor of Manitoba, Adams George ARCHIBALD, to travel through the newly acquired western territories and report on conditions there. Butler would write The great lone land, which influenced perceptions of these territories and its inhabitants:

“The report focused on the state of the native population and made recommendations as to how the Canadian government should go about establishing its authority with the least possible disruption. Butler’s proposals for travelling magistrates and a specially recruited police force were eventually followed, but the general attitude of the report was more important than any of its details. The revulsion it expressed at the ‘war of extermination’ being waged by the American government against the Plains peoples and the assumption that Canadians could do much better caught perfectly the best intentions behind Canadian westward expansion.…

“‘He who has once tasted the unworded freedom of the Western wilds must ever feel a sense of constraint within the boundaries of civilized life,’ Butler wrote in 1871.… His admirers included such disparate individuals as Winston Churchill, John Ruskin, and Theodore Roosevelt. The great lone land, which had gone through 17 editions by the time of Butler’s death [in 1910], is certainly the most vivid and compelling description of western Canada in the 1870s, before the victory, in his time, of ‘barbed wire, the grain “elevator,” the machine-made boot, and the two-cent newspaper.’”

Some residents of Red River, such as Joseph James HARGRAVE, nephew of Governor William MACTAVISH, published well-known works on the history of the colony and the development of the northwest, as related in his biography:

“Using his experiences as clerk and secretary to Mactavish and his access to fur trade and colonial documents, Hargrave produced in 1871 his major contribution to western Canadian history, Red River. The book is a combination of history and personal observation of the economic, social, political, judicial, and religious institutions of the settlement prior to the 1869–70 uprising. Hargrave’s thesis is that the settlement and its institutions owed their existence to the vitality of the fur trade. The work, published in Montreal by John Lovell, has had a lasting importance; William Lewis  has referred to its author as one of Manitoba’s better historians.”

Teacher, historian, and politician Donald GUNN left his mark on Red River, especially through his contribution to scientific knowledge:

“[Gunn] was a member of the Council of the Institute of Rupert’s Land of 1862. His interest in natural history was reflected in his experiments with new methods of tillage and new strains of wheat and led to his long-standing connection with the Smithsonian Institution, of which he was one of the earliest meteorological correspondents. He earned a tribute from its secretary for the reliability of his observations of the weather and the importance of the objects he contributed in nearly every branch of natural history as well as archaeology and ethnology. In 1866 he made a special exploration for the Smithsonian of the region west of Lake Winnipeg to collect skins and birds’ eggs, ‘among the latter several previously entirely unknown in museums.’”

The following lists of biographies give more information about the diverse aspects of the colony’s intellectual and scientific life between 1812 and 1870.

Contributions to the Natural and Social Sciences

Writing the History of Red River and the Northwest